Glasgow is an hour away from Edinburgh by train (Crosscountry). We did a day trip from Edinburgh. The city’s important sights are around the main square making it walkable from the station when you arrive .Nevertheless we took a day pass(4 pound) pass so that we could do a bit of sightseeing from the bus when we were tired. Glasgow is famous for its squares and the royal buildings  that bespeckle the city.

Here in the map you can see the places we went to.

If you walk the entire route it takes 2.5 miles one way.

The iconic square facing the city chambers is a sight to see. It is close to the station and a good place to relax. George Square is the principal civic square in the city of Glasgow, Scotland. It is named after King George III (Source :Wiki)

We sat there feeding the pigeons. It was a pleasant day (without rain which we were happy about)

The City Chambers or Municipal Buildings in Glasgow, Scotland, has functioned as the headquarters of Glasgow City Council since 1996, and of preceding forms of municipal government in the city since 1889.(Source:Wiki)

There are free guided, public tours of the Chambers on weekdays at 10.30AM & 2.30 PM, lasting 45 minutes. No booking is required – You just need to turn up.

The free tour for the chambers was at 2.30 PM. We were lucky to be stopped by a lady telling us that the tour is at 2.30 PM else we wouldn’t have gotten in. The place was magnificent. It was where the city council proceedings take place.

Fun facts told at the tour: The building was Inaugurated in August 1888 by Queen Victoria, Pillars of marble and granite give way to staircases of Carrara marble, freestone, and alabaster, and a ceiling decorated in gold leaf is topped by a stained glass dome.

We walked up the largest marble staircase in Western Europe, made of imported Italian Carrara marble .It holds the largest marble staircase in the world. The second largest is in the vatican at a mere 2 and a half stories while Glasgow has 3!. The grandeur continues through to the magnificent Banqueting Hall, where Nelson Mandela received his Freedom of the City award in 1993

It is another square where there is gallery of modern art. I am not a big fan of art, leave alone modern art, but decided to talk a walk through as it was for free. Witnessed bizarre works and most of my time was spent trying to figure out what the artist tried to do. It is a good detour away from the chilly streets.

Another two squares to visit. St Andrews square is close to River Clyde worth paying a visit to the bridges for a good sight 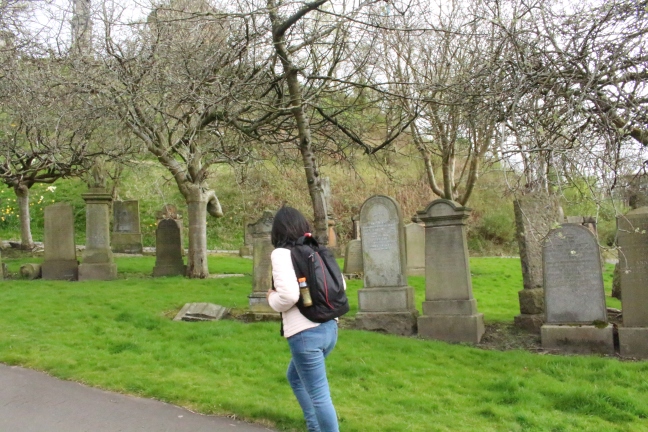 It is a Victorian-era cemetery containing the graves & mausoleums of prominent Glaswegians of the day. It closes early so try to make it before 4.30PM. We took a bus to the necropolis (finally put our bus passes to use)

The graveyard looked haunted by evening and it has a tortuous path to the top.

It is situated next  to necropolis and has beautiful interiors.

Glasgow Cathedral, also called the High Kirk of Glasgow or St Kentigern’s or St Mungo’s Cathedral, is today a gathering of the Church of Scotland in Glasgow. (Source:Wiki)

We took a bus to the station and left to Edinburgh. Glasgow makes for a good day trip from Edinburgh. The city is beautiful with royal buildings.

Everywhere I go I eat a delicacy typical of the place and in Glasgow it was the deep fried mars bar.

Mars chocolate bar battered and deep fried in oil. It was a heavily non-diet diabetic snack but yummy!

I can suggest this cafe for anyone going to Glasgow:  Where the Monkey Sleeps.

It’s a cafe frequented by the locals.
http://www.monkeysleeps.com/

Have you been to Glasgow! Any places I have missed out … Share them in the comments!